Biofuels contributed to the last food crisis, but may solve the next one. 

Between 2008 and 2012, the production of biofuels (ethanol and biodiesel) increased so much and so fast that it took over a large part of the cereal and oil crops, especially corn in the US, and was thus one of the most important factors in triggering the crisis. 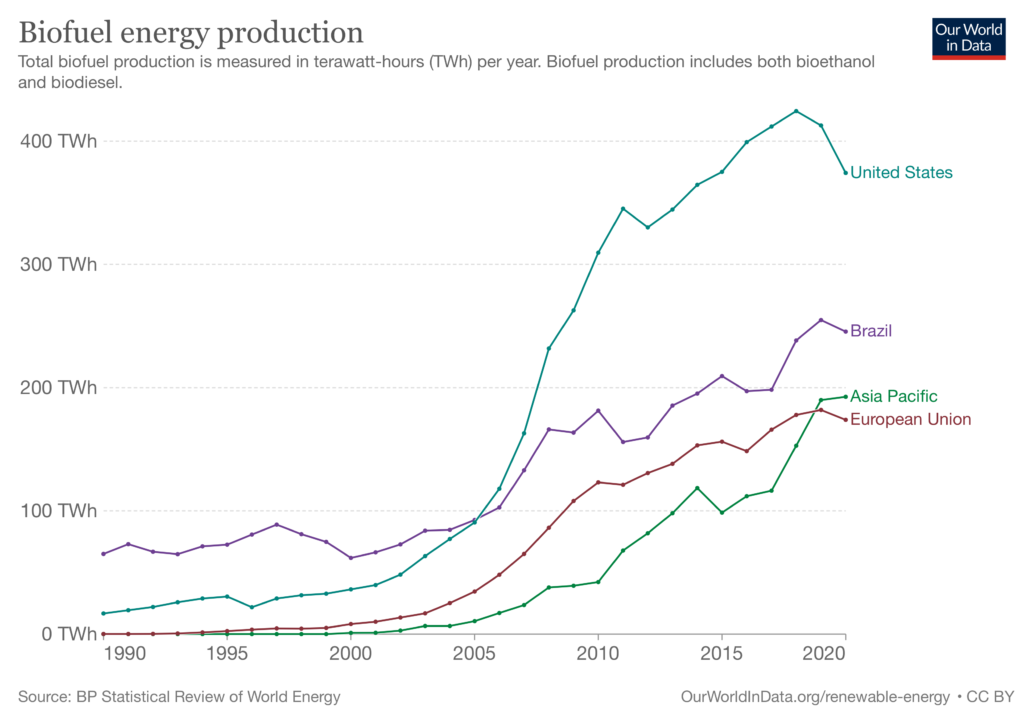 The reasons are well known. Food shortages lead to a price increase many times higher than the percentage shortage. In other words, if there is a 10% shortage of food in the market, the price increase can be 30 or 50%. This fact was noted as early as 1712 by Messrs. King and Davenant, observing the behaviour of the corn market. Although we have known about this phenomenon for three centuries, we have not yet found a solution.

The current food crisis began with COVID, and was amplified by the Russian invasion of Ukraine. Between them, the two countries exported a quarter of the world’s wheat. Can the food system be prepared to respond to a shortfall of this magnitude?

This time it was war, but next time it may be a drought caused by climate change. Agricultural production is variable by nature: there are years with high production and years with low production, and prices vary accordingly. During the 2008-2012 crisis, UN system organisations and international NGOs proposed establishing international grain reserves. I also advocated this position during those years, but later changed my mind.

The international reserves needed to handle a 10% export shortfall would have to be huge, in the tens of millions of tonnes. A reserve of 70 million tonnes would cost about a  billion euros per year. But there is another problem, which is what really makes them unviable: the grain has to be sold every few years, and by bringing it to market, it depresses prices wherever it is offered for sale, creating serious problems for farmers. National and regional reserves, which exist in many countries, cause this problem to a lesser extent because they are smaller, making them more manageable, but less able to respond to major disasters. What could be the solution?

The much-maligned biofuels contributed to the 2008 food crisis, but could mitigate the next one. This was already proposed at the end of the last crisis, but did not get much attention. The argument is simple: if we want stable food prices, we need a buffer capable of cushioning the variability of production (and distribution in this case).

The leading producer of bioethanol is the United States, which uses 40% of all corn for bioethanol. It accounts for 55% of world production. The second largest producer is Brazil, with 27%, but Brazilian bioethanol is made from sugar cane, so it does not count as a grain reserve to draw on. European production is testimonial, with only 5%, largely made from wheat.

The idea of using grain for biofuels as a safety buffer was proposed in 2011 by several economists in papers (David Just and Harry de Gorter, Brian D. Wright and Anna Locke and Steve Wiggins). The summary, inevitably simplified, is that it has to be a short-term measure (maximum six months), and in exceptional situations (such as the current one). Second, the quality of the grain must be checked to ensure that it is suitable for human consumption (some of the grain used for biofuels is of inferior quality). Thirdly, money must be allocated to compensate mills for the production stoppage.

Legislation needs to incorporate flexible mandates to be able to lower the percentage of ethanol blended into gasoline depending on conditions. In addition, some questions remain that require further research: what are the implications of abrupt changes in the percentage of ethanol in refineries and vehicles, how will it affect livestock, which will have fewer by-products to feed, and whether there would be negative effects on the operation of the ethanol industry that have not been foreseen.

The main conclusion is that it is technically and financially feasible. Finland has just done so, reducing the percentage of ethanol in petrol from 19.5% to 12%. But to do it on a large scale requires international coordination and political will. Perhaps the latter is the most difficult to achieve, but it’s hardly surprising, is it?