SHOULD ENVIRONMENTAL SERVICES BE PAID FOR?

Look at this graph on cereal cultivation. 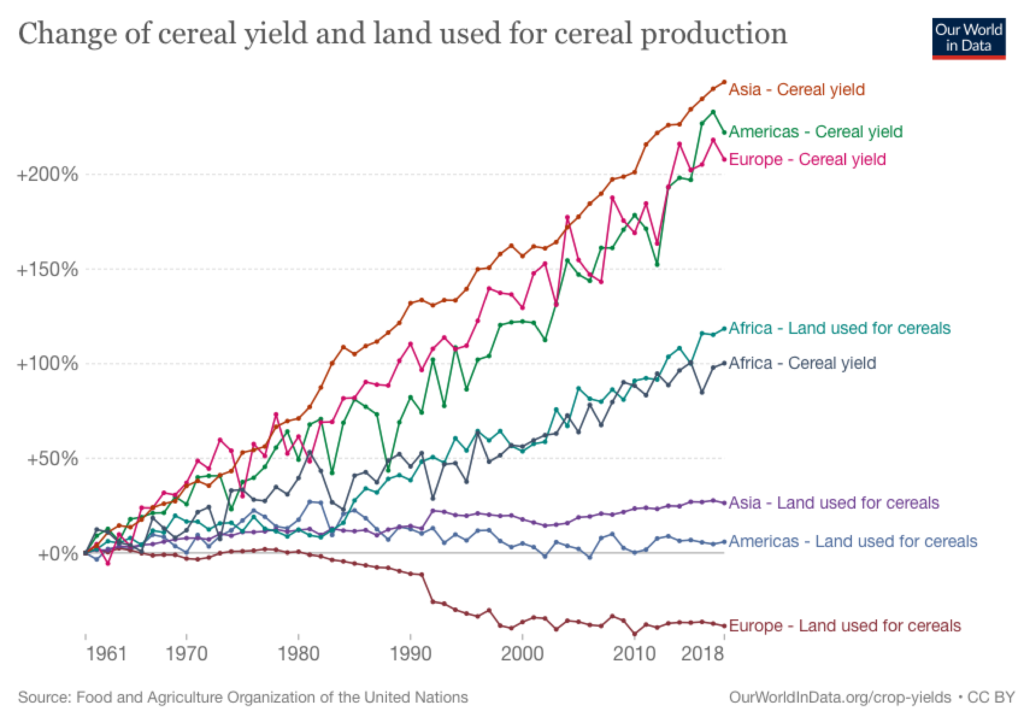 Yields in Asia, America and Europe are increasing twice as fast as in Africa. The land used in Africa is increasing, while in the rest of the world it is staying the same or decreasing. Africa cannot keep up with productivity growth, and that translates into poverty for millions of farmers.

In some places it will be possible to invest in order to achieve fairly competitive yields. But in others, because of the lack of agro-ecological conditions, it will not be possible. What can be done in the latter places?

People choose to move to the cities, which is a rational decision. For those who stay, one of the solutions is to offer them income for planting trees. The mitigation achieved will be marginal; it is quite likely that, if the conditions are not right for acceptable yields, they will not be right for trees to grow better than in other rainier areas.

The reasons for doing this can be found in what some famous economists have said:

In his General Theory, Keynes said that it was justified to pay for doing any work if there was no possibility of doing something more useful. In his example he talked about burying money to justify the work of digging it up and finding it.

“If the Treasury were to fill old bottles with banknotes, bury them at suitable depths in disused coalmines which are then filled up to the surface with town rubbish, and leave it to private enterprise on well-tried principles of laissez-faire to dig the notes up again (the right to do so being obtained, of course, by tendering for leases of the note-bearing territory), there need be no more unemployment and, with the help of the repercussions, the real income of the community, and its capital wealth also, would probably become a good deal greater than it actually is. It would, indeed, be more sensible to build houses and the like; but if there are political and practical difficulties in the way of this, the above would be better than nothing”.

That is exactly what should be done anywhere in Africa where agriculture is not profitable. Put in money to do anything, and if possible, not distort the market. Planting trees and paying to maintain them is a good option.

Rainer Schickele was a German agro-economist who studied land use in dust bowl times in the United States. He understood how farming practices and incentives influence erosion. His work can be applied to the agricultural sector in general.

Small farmers also deforest. So do those who expand cocoa and coffee crops, or those who deplete the marginal lands on which they work, advancing the agricultural frontier. It makes economic sense for them to do so. That is why Schickele, seventy years ago, said that the individual cost of depleting land was less than the social cost. In other words, it is economically rational for the farmer to exhaust the land, and it is society that loses, not so much the farmer, who will look for new land if it is available. This is why the economic loss of caring for the land must be compensated.

These two gentlemen said something so obvious that it is hard to believe that we take so little account of it. That in order to reduce inequality, it is good that money goes from rich to poor and not the other way around. It is not so easy to make this transfer: most of the time we will not find a reason to buy or pay something to the poor. And that is where Schickele and Keynes come in: pay because it is good to do so, using whatever reason, and if you can do it to take care of the earth, so much the better.

The limits of this approach (how much area can be regenerated or reforested? how to avoid greenwashing? what side effects do these payments have on communities)?) will be discussed in another post, as this one has already been too long.

According to the United Nations Environment Programme, if food waste were a country, it would rank t

The white elephant in the room at COP26